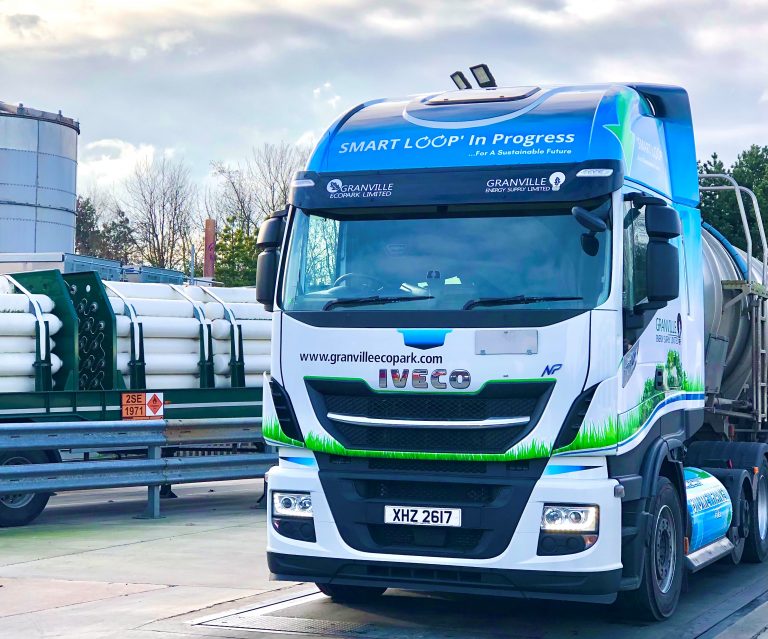 Air quality monitoring, the lack of investment in alternative fueling infrastructure, and the need for greater collaboration on procurement to enable local authorities to access funding were among the topics discussed at the first-ever WCRAQ air quality and emissions reduction debate at the Titanic Centre in Belfast on October 12, 2021.

The City of London’s air quality strategy was top of the agenda at the debate thanks to an opening presentation from Jon Averns, Director of Markets and Consumer Protection at the City of London Corporation (now retired). He explained the measures taken by the local authority to protect residents and visitors from air pollution to attendees from all over the UK, including representatives from Veolia, Ubico, Simply Waste/Biffa, Ards and Northdown Council, and Granville Ecopark. The roundtable was also attended by suppliers and manufacturers from the fleet and waste management industry, such as Dennis Eagle, CMS SupaTrak, Allison Transmission and A to H Solutions.

The City of London Corporation is looking to work together with other major cities, such as Belfast, to establish what can be done to mitigate harmful emissions. ‘We work with national charities such as Environmental Protection UK,’ said Vince Dignam, Business Performance and Transport Manager for the City of London Corporation. ‘We must submit an annual air quality return to Defra and the Mayor of London. We have static air quality monitors all over the City and a mobile monitor on one of our electric refuse collection vehicles. We are in the process of phasing out diesel and replacing it with electric.’

The City has a wide range of vehicles in use, not just for the Square Mile but also for its open spaces, such as Hampstead Heath, Burnham Beeches, Epping Forest, Kent and the Surrey Commons. ‘We have a cemetery outside the City and our own police force,’ said Jon Averns. ‘This means we have a wide range of vehicles that need replacing. We have a focus group to assess the best possible alternatives for each application and look at the available options. However, the capital costs are often more than diesel equivalents, so we have to look at the total cost-of-ownership model and then get the backing from our elected members. Luckily, they are keen to bring about these improvements.’

Ian Bourton, Head of Fleet Operations at Ubico, asked whether the Corporation has backing from the businesses based in the City, and Jon explained that while CoL doesn’t get direct financial support, it does reach out to business via its business engagement scheme. ‘We have been advising organisations about what they can do to improve air quality, how they run their buildings, employees, transport, contractors, suppliers, and deliveries.’

The CoL collects air quality data from over 100 locations and reports this data to elected members and organisations such as TfL and the GLA. It also cooperates closely with Imperial College London, which is paid to audit the data and make it available to the public on a web platform.

Jon pointed out that the emission concentrations can vary markedly across the city. For example, emissions were very high at Bank Junction. CoL implemented changes at the junction to improve air quality and road safety as part of its public realm scheme.

Kevin Barcroft, Head of Fleet from Simply Waste/Biffa, pointed out that one of the most significant barriers to going green is refuelling and infrastructure. ‘Do you have any plans to help with that?’

Jon said there are no petrol stations in the Square Mile. The City Corporation has carried out several schemes, including Low Emission Neighbourhoods, for which it received grant funding. This enabled the installation of rapid charging stations in the Barbican Estate, including one for taxis. It also considers charge points for planning applications and new builds so that delivery vehicles can recharge.

Gordon Boyd, MD of GB Associates (environmental consulting), said he had taken a survey in Northern Ireland and one of the questions asked respondents if they would name their nearest electric charging point.

‘Only five people out of 200 knew where their nearest charging point was. That is one of the biggest problems in NI. We have not got political support, and we don’t have a good national grid infrastructure here. We have a situation whereby one company bought electric vehicles, and these are just sitting in stock because people don’t know where to charge them. Although this has improved over the last few months, we need to do more.’

‘We believe that biomethane has a considerable role in the future of vehicle fuel. The introduction of a new biomethane fuel point at our site last year boosted accessibility for customers thinking of switching their fleet. Biomethane is compatible with CNG vehicles and is up to 50% cheaper than diesel. However, a higher capital cost is initially involved when converting trucks to CNG, but the returns and fuel savings are considerable.

‘What’s the incentive? We thought it better to have a high capital cost and to invest in the alternative, sustainable transport methods and not have infrastructure there as backup. I guess the real question is how you advise people to do it without the infrastructure,’ said Tim.

‘The Westminster Commission for Road Air Quality has been lobbying the Government about this for a while,’ said Jason Airey, MD for CMS SupaTrak, and Executive Director for WCRAQ. ‘In France, they get a subsidy of up to €300,000 for a vehicle, and in Switzerland, it is even more. However, in the UK, there is no subsidy.’ He pointed out that there is no financial incentive to do anything around low-emission heavy-duty vehicles.

Gary Gregory, Head of Fleet UK Municipal & UK Fleet Development at Veolia UK, has been operating electric RCVs with a Dennis Eagle narrow body in the City of London and Westminster. ‘We are early in the process, but there are fewer moving parts and less maintenance over the vehicle’s life. We set up our own charging infrastructure. We are also working with Westminster Council on the energy-from-waste programme, and it requires significant infrastructure investments.’

Participants agreed that the government in Northern Ireland seems more focused on hydrogen investments, mainly because the Wright Bus factory is based in Belfast. However, a solution is required for the entirety of Ireland, as Jeff Shaw from Ards and Northdown pointed out. ‘Whether this should be electric vehicles or focusing on air pollution, we need to talk about it. Unless we can get our politicians to think about this, we will lose out.’

Andy Graves from Dennis Eagle suggested that many authorities now combine to enable collaborative procurement. ‘They can have a bigger voice by working together. There are real benefits to be found in this approach.’

Jason Airey agreed. ‘Our crucial takeaway here is how we can get boroughs to work together and understand where they can get funding. That is the main hurdle.’

‘We need engagement from government to make this transition to sustainable transport,’ said Andy Graves. ‘That is happening in certain quarters. For example, the Welsh Government has partially funded the purchase of eCollect RCVs for several councils to help drive their sustainable transport strategy. Part of the deal was that these early adopter councils lend their eCollects to neighbours to try out. And it’s worked in that the orders have been rolling in.

‘Of course, a few electric municipal vehicles still don’t make a huge impact on total transport emissions. But these are the low-hanging fruit. Electric RCVs go back to the same location every night where they can easily be charged, so it’s an easy win. But they also prove to both the general public and commercial operators that electric vehicles work and are ready to operate here and now. And as they travel up and down every street in the country, they’re quietly telling everyone electric vehicles are a really excellent option.’

Gordon Boyd of GB Associates highlighted the importance of emphasising what good looks like and suggested the development of a white paper based on the discussions. ‘We should produce a white paper that we can communicate consistently at Stormont and Westminster, and even at a local level, to enhance understanding of the problems.’