The eSwingo 200+ sweeper ­– the first of its kind in a London borough – took to the streets of Harrow this month.

Cllr Varsha Parmar, Cabinet Member for Environment, said: ‘I’m so proud that Harrow is leading the way with this electric sweeper. It looks fantastic and brings so many benefits to Harrow. It will reduce our carbon footprint, save on running costs, and it’s a bit quieter too.’

Going electric is expected to save more than 7,500 litres of diesel a year, resulting in a reduction of more than 19,875kgs in direct carbon emissions and saving £10,500 in fuel costs. It can complete an eight-hour shift on one charge.

Investing in this new technology is part of the Council’s drive to address the climate and nature emergency and work towards being a carbon-neutral organisation by 2030.

The sweeper complements the council’s existing fleet of modern and efficient Euro 6-compliant vehicles, including 15 electric vans delivering a range of services, including all the Council’s Meals on Wheels.

Richard Bryant, managing director of manufacturer Aebi Schmidt UK, said: ‘We have a long-standing relationship with Harrow Council and are delighted that they have taken delivery of their first eSwingo to help meet their green ambitions.

‘The eSwingo offers both local authorities and private service contractors not only the cleanest possible emissions but provides sustainable, cutting-edge technology and an all-inclusive package covering service, maintenance and performance needs.’ 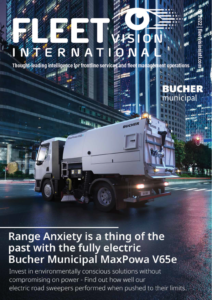 Editor’s blog – the challenge is urgent, but innovation is rapid