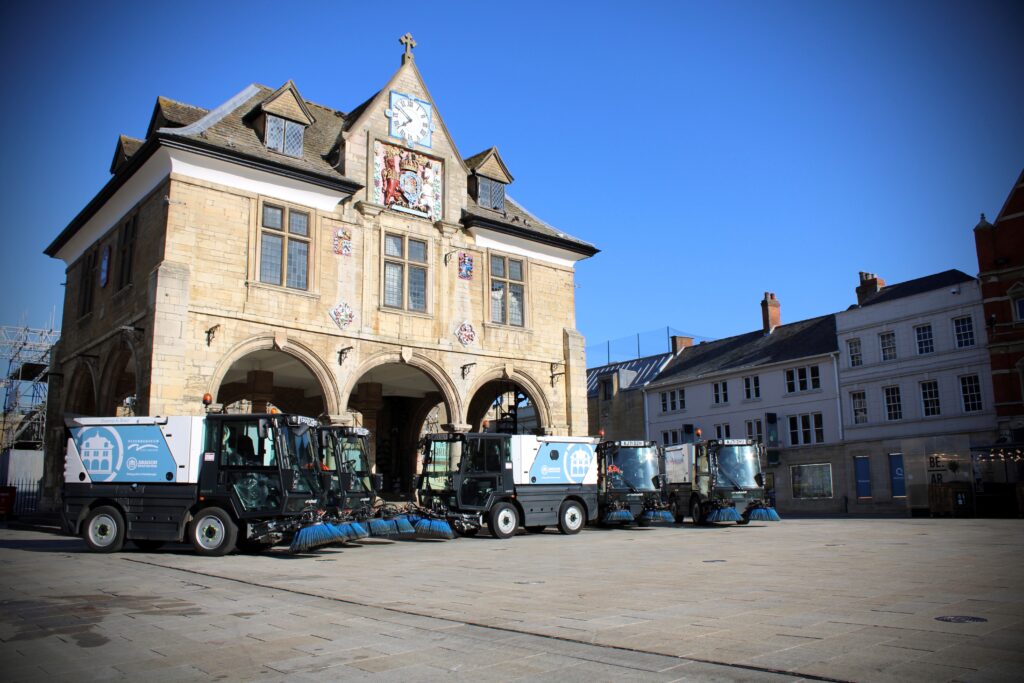 The procurement process was handled by Aragon Direct Services, Peterborough’s Local Authority Trading Company (LATCO), which evaluated the market with a specific focus on output, performance, aftersales service and price.

The Swingo was the most economically advantageous in terms of quality and price, leading to five brand new sweepers, all Euro 6 compliant diesel-engined models and fitted with Schmidt IntelliOPS Data System, being added to the Peterborough’s Streetcare fleet.

A factor in the provision of aftersales service was that Aebi Schmidt’s UK head office is based in Peterborough and, as a local business, was therefore handy for any repairs should they arise.

The Swingos, which are based at Aragon’s Fengate Depot, operate up to seven days a week, on nine-hour shifts from 6.00 am to 3.00 pm, cleaning and sweeping pavements, cycle paths, and local roads and other urban areas within the city.

Three of the Swingos have been fitted with Schmidt’s highly acclaimed weed arm, which features several hydraulic tilt functions offering a multitude of options for heavy weed removal in an environmentally friendly manner without chemicals – which is in alignment with the Council’s integrated approach to weed management

The Council has also opted for one model to be supplied with a flexible wonder hose, which can be easily transferred from machine to machine as required. The wonder hose is perfect for accessing tricky nooks and crannies under and behind street furniture which would be inaccessible otherwise.

Chris Jackson, Streetcare Manager at Aragon Direct Services, which operates the Streetcare fleet on the Council’s behalf, said: ‘We have been very pleased with our decision. Operator feedback has been very positive.

‘Our drivers like the fact that the Swingos offer much higher performance with far more power and greater suction than the models they replaced. That means that they can do a job the first time, rather than having to go back several times to complete it.

‘We are also pleased by the fact that Aebi Schmidt is based in Peterborough, and while that wasn’t critical to our final decision, it’s always good to support a local business, especially as it adds value in terms of repair timescales and convenience,’ he said.

Aebi Schmidt Area Sales Manager Matthew Elderkin, who is responsible for the relationship with Peterborough City Council, said that the Swingos had been supplied with extra features to meet the Council’s requirements.

‘To meet environmental concerns, our Euro 6 compliant diesel engine can be easily modified to run on hydrotreated vegetable oil (HVO) if required in the future, which reduces greenhouse gas emissions by 90%.

‘The Council opted for three of the Swingos to be fitted with the Schmidt weed arm, which removes the need for chemicals to tackle any weed problems, while the deployment of the IntelliOPS system tracks performance, location, and fuel consumption,’ he said.